We have gathered together a list of frequently asked questions that we get; click on the question to show the answer. The response are honest and, to the best of our endeavours, accurate. The usual caveats exist and if you have any queries about an answer then please get in touch.

If you have any other questions about dung beetles you would like us to try and answer then send us a message.

May / June the numbers are high, then it tails off a bit over the hotter summer building up again end of the summer / September. Different species are around at different times of year so always good to look through spring all the way to Autumn.
James
Dung beetles can arrive at a dung pat within an hour, but it is better to give it a day or two to build up numbers. The best time varies with dung consistent, weather, time of year and other factors but you do not want to wait till it dries out.
James
The cows need a bit more ‘Weetabix’ in their diet. Fundamentally they need more fibrous material in their diet, 'weed' grasses and herbs.There could be other issues at play also so probably best to contact a vet / nutritionist to ensure that your animals are not showing the signs of a nutritional defect or a disease.
Bruce
There are around 60 species of dung beetles in the British Isles, some are generalist, and some are specialist. Some of them will prefer sheep dung but will also be found in similar dung from other animals.
Sally-Ann
Interesting - captive breeding our natives is not easy, I have looked at doing it with some of our rarest species. I have concerns on where to get breeding stock from as many species are vulnerable and cannot take the hit of any population removal plus you cannot collect from SSSI’s etc.Then you have got contamination of fungi / disease into the local population to worry about.If you bring in the big geotrupids you screw the habitat balance for the other species groups and can have seriously detrimental effects on rarer specialist species in particular
Sally-Ann
As part of my Nuffield research, I have had the opportunity to travel around South Australia and Tasmania to witness how this process is being undertaken on a large scale in farms using species found in Africa and even the UK.It has been very successful.However, the fact that we already had these beetles here and their populations plummeted in areas means there is something wrong with their environment.Mass rearing will create a starter colony with farmland being the ultimate rearing facility for your beetles, this process can then take 6 - 10 years to fully populate.Creating a colony is a complicated, expensive, time consuming exercise that requires a lot of expertise.If the issues that caused the population decrease in the first place haven't been addressed, the starter colony will only disappear. We need to the basics right first.
Bruce 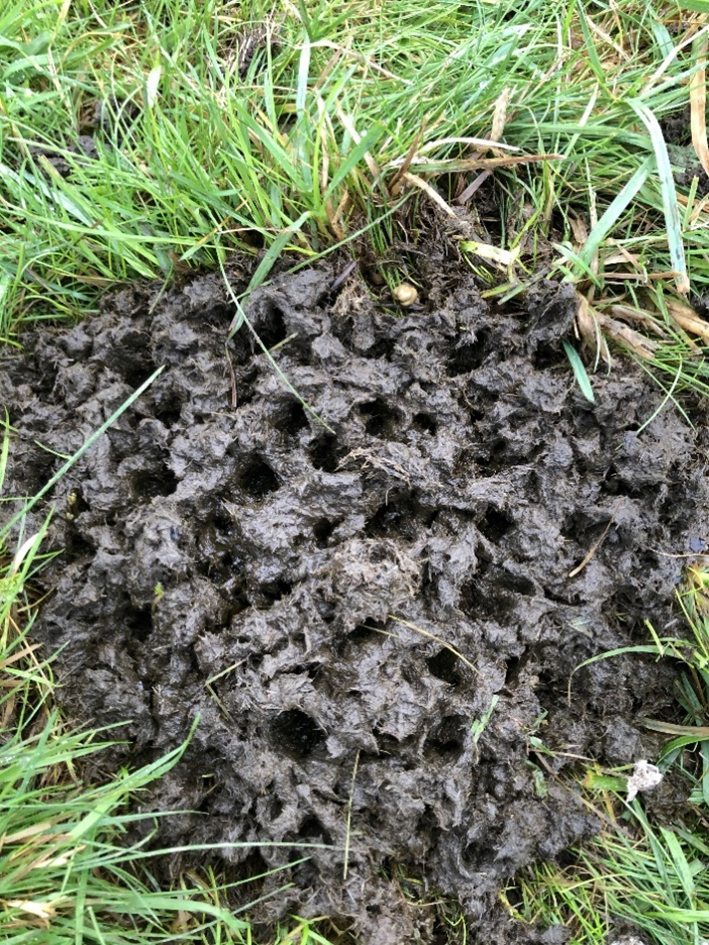 It depends on the depth of the holes but probably not I am afraid. It looks like classic bird feeding evidence, probably from the wader group, maybe woodcock
Sally-Ann
This is a great healthy sign of ecology. The predators would not be looking for beetle larvae if they knew they were not going to find any, therefore there are plenty on your farm.Well done.The amount of impact this feeding exercise will have on your beetle population will be very small.
Bruce
There is still a lot we don’t know about how dung beetles are impacted by grazing practices, however, within rotational systems, dung beetles will move between paddocks or fields to occupy any dung. Dung beetles breed only in one dung pat, so the larvae are static in / below that pat. The fact that there is no more dung being deposited in the field or paddock isn’t an issue as they have all they need in the one pat.
Sally-Ann
Artificially introducing dung beetles to a grassland in the UK is not viable for several reasons, including the fact that you would have to disturb and impact populations elsewhere.Many species are threatened so shouldn’t be moved and it can be difficult to identify species and not accidently disturb threatened dung beetles.Also, a natural population will have a far greater long term success rate.
The good news is that dung beetles fly, so given the right conditions they should naturally populate your grassland. There is no conclusive data as to how far dung beetles will fly, so having neighbours who have dung beetles will really speed up the process.
First off, they will need dung, which means livestock. If you are becoming more extensive with zero inputs, then you a heading in the right direction. Having dung out all year will also help support ongoing dung beetle populations. There are lots of other recommendations on the website as to what else you can do to help.
It would be worth doing some flotation tests of a dung sample plus a trowels depth of soil from underneath the pats in May/June to just double check you don’t actually have dung beetles already; you may get a pleasant surprise!
Bruce
We use cookies to improve your experience. Browsing this website you agree to our use of cookies.
More info Got it!